The story of our farm has to begin in the mid-50’s when my grandfather, R.J. Long, was a barber in downtown Chattanooga. He had become friends with many of us customers and one of those was Howard Buckner (son of Willie & Nancy Buckner – owners of the farm at that time). Howard would from time to time encourage my grandfather to “bring your grandchildren to my dad’s farm in Chattanooga Valley.”  With entertainment in short supply back then, the proposition was appealing to my dad.  Once prior to my birth and once when I was still an infant, my dad brought his kids (and I have three older brothers) to the farm just to walk around and enjoy an afternoon waking the fields and wading in the creek. The picture on the left is the earliest photo that I have of the Buckners and of the farm around the late 40’s.  The picture on the right appears to be in the early 60’s and seems to be before the barn had a fire and was partially destroyed because the barn shape is different than it is now.  Mr. Buckner had a mess of cows – some very prized ones, they say. Willie and Nancy Buckner who had owned the farm prior to us lived quite simply.  The slight glimpse of the edge of the farmhouse and background show a very different piece of property than it is today but those were different times back then for sure.  Farmhouses were simple and flowerbeds were embellishments not necessary.  Trees were removed out of necessity and for pasture opportunities.  Life was a struggle to exist as most southern farms did in that time.  They were mostly self-sufficient type farms where you trying to just live off the land and raise their families.

Fast-forward in the story where my dad brought us kids out to visit the farm and play in the creek in the late 50’s.  My dad was like most in that era, struggling to make a living while raising children and trying to grasp a hold of that elusive “American Dream.”  As my dad strolled around the farm back then, he vividly remembered saying, “I hope that one day I can have a farm like this,” though at the time, the words seemed more like a fantasy than even a hope. Now, fast forward to the mid-70’s when my dad found himself back in Chattanooga after a short-term relocation to Michigan through his employer, Combustion Engineering.  Back in Chattanooga with only me (age 16) underfoot, orthodontist bills for four teenagers finally paid off, and finally money jingling in his pocket.  As he sat in his recliner, he just happened to be reading the newspaper and noticed an ad for an auction – an auction for the upcoming weekend.  As he read more details, it sure did sound like that place in Chattanooga Valley that he had been to so many many years ago.  Sure enough, it was the same place. That weekend, he loaded my mother and me in the car and headed to north Georgia in hopes of bidding on one of the tracts of land (5 in all) to which the farm had been divided into as auctions often will try to do.  I still remember driving up that long gravel driveway.  There was a large tent set up at the top of the driveway in the hay field in front of the old farmhouse.  There was a couple of dozen cars parked in the grasses and people scattered all over.  I saw the old farmhouse and the big pole barn and can visualize the yard full of farm implements of all sorts, stacks of boxes and garden tools, oil barrels and buckets, and just a clutter of junk (that I now wish I had).  My eyes were set more on the barn than the junk or even the farmhouse as I was a horse-crazy girl from infancy and I was well aware of the possibilities of my own dream coming true if I only had a barn.

On June 5, 1976, my dad oddly won the auction.  What started as a desire to be able to purchase one tract of land on the creek turned into a twist of fate where he ended up able to purchase the whole farm – fifty acres with that same sweet creek running through the bottom land, a large cattle barn, and an old old farmhouse.  My life would never been the same again.  The picture above is of my parents, David and Willene Reynolds, shortly after they had purchased the farm.  The did their own version of the “American Gothic” pose here and it is one of my favorite photos of them.  Their dream had come true and really….how often does anybody’s dreams come true? 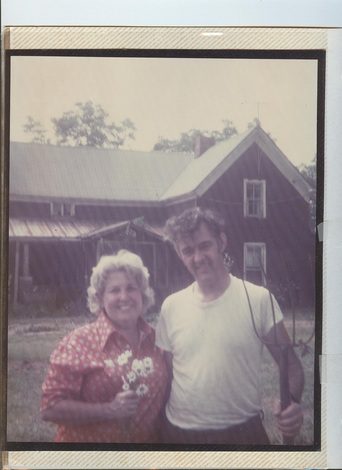 As you can see from these photos, the farmhouse is very old and somewhat dilapidated.  From what we can ascertain, it was built pre-Civil War and we indeed found square nail pegs in the inner stud walls.  With many apparent additions over the many years, the simply built farmhouse had morphed and accommodated many a poor dirt farm over her many many years. Records shows that after the “removal of the Cherokee Indians” that Georgia assumed ownership of Indian land and held lotteries in order to sell the land back to settlers.  Abraham was the winner of this parcel and in 1938, he purchased this farm plot for $$ . Over this 175+ years, the old farmhouse has been home to many a farmer who more often than not were struggling to live off the land and to feed their families.  Crops like sweet potatoes, corn, cotton, and sorghum were grown in her fields at various times, and even a sorghum mill use to be set up down by the road and probably looked much like the picture above shows.

But when my daddy bought the farm, his intentions were not to grow crops really.  It would be a gentlemen’s farm, as they say.  He would keep his day job and just play farm – owning some cows, growing hay for them, and of course having a large garden but not trying to live off the land.

This is a picture of the farm not long after my parents bought it.  The photo is taken by me on the other side of the creek and on the high end of the ridge looking towards the barn with Lookout Mountain in the background.  The hillside had been grazed by cattle so there were very few trees on it, unlike today.  Daisies dotted the landscape and the creek can be seen wiggling its way through the lowland.  The barn sits atop a slight rise in the landscape and the hay in the field appears to have just been harvested. This photos above of the farmhouse was taken that first winter of 1976.   You can easily see the aged condition of the house.  The wrap-around porch was screened in but in disrepair, that old asphalt type siding was missing in many places, the old tin porch roof rusting, chipping paint and decaying windows – the stark image of a past era when life was totally different than today. My dad’s initial intentions were to restore the farmhouse, alter the existing steep staircase to the top floor, and to add on a large kitchen and bedroom wing to the back of the house.  First, was to tear down this lean-to type kitchen/bathroom addition and back-porch off of the main part of the farmhouse. Once this was done, he discovered all sorts of termite damage and structural issues which made him realize that this renovation project was going to be way too complicated and time-consuming so he opted for a Plan B which was to build a new home right near it.  So – he boarded up the back of the house where he had ripped it apart and began building the new home. In fact, the three of us lived in the farmhouse for over 6 months during this building process.  The farmhouse still had electricity but no kitchen or bathroom – for these had been torn down when we thought there would be renovations.  My mother turned one side of the screened-in porch into her make-shift kitchen with a wok, a toaster oven, and Coleman Camping Stove.  During the summer, we actually would shower outside by the hydrant.  The only toilet initially was in the barn so I will admit that we were not only on an adventure now with our farm but it was like stepping back into time as well….but again – life was good.  I was finally able to get a horse and enjoy country life – I was in heaven ever bit as much as my parents were. In 1980, I got married and lived in town.  Shortly afterwards, we began 3 year process of building our own farmhouse on the property and we raised our 3 children here.  Over these many years, the old farmhouse just sat and was mostly used as a storage building……and a playhouse for my kids. Over the years, many visitors to the farm would compliment us over the property but some would say, “oh, but you should tear down that old farmhouse” while just as many would say, “oh, I hope you don’t ever tear down that farmhouse!”  Well – we aren’t “tear down” type but renovating it wasn’t an option for many years.  Renovations cost money and time – lots of both.  We often spent money on the farmhouse just to keep it standing by fixing windows, patching roofs, and such…but a full fledged renovation didn’t come about until much later. My eldest daughter, Jill, decided that she wanted to get married here at the farm for an outdoor ceremony and a barn reception.  This was 2004 when the internet was around but mostly useless – and in 2004, no one had heard of “Barn Weddings” but it was going to be “so-Jill” and we proceeded to prep for it. We did not convert the barn as you see it today but we did outst the animals from the barn months ahead of time, mucked the stalls good, power-washed everything, and began making curtains and hanging lights.  We collected vintage china and silverware and Jill’s vision of the barn conversion began.  There was no term “rustic chic” back then and there certainly was not any book or website that gave us any ideas or help.  I certainly give Jill the credit for not only her vision but her boldness to be unique.  We did enjoy the process and the wedding was a huge success. History of this farm, legacy of my family and their contributions to me and this farm – past and current, and a deep love for the land are all important to us.  We have woven this aspects into our approach of our venue.  This windmill fan is even an heirloom from grandparents.